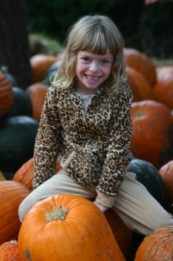 Helping Put Business on the Map since 2004!

(Stern PR–Gretna, NE)  – Vala’s Pumpkin Patch near Omaha offers fun, not only for kids, but for moms, dads and grandparents, too. Monday, Tuesday, Wednesday and Thursday evenings after dark is when to go. Not only do you pay a reduced entrance fee per person (kids 2 and under FREE), but the night sights are more appealing than during daylight. Weekends tend to be crowded and admission costs more.

The fun is on stage. Take comedian www.amazingarthur.com who holds shows throughout the day near the entrance/exit. Oh my gosh. As a mother, I giggled every time – he walked and talked. He’s a hilarious jokester who peppers his jokes with a little bit of salt from the 80’s, great for our generation, and he is especially proficient at magic for kids.

Beyond the satire, kids age 6 and up will enjoy the free open air bouncy blob – it’s gigantic and trampoline-like. Plus, it’s the perfect way for children to release their energy. There’s a blob for tweens/teens, as well. Mom’s and dad’s may partake. Of course, you gotta take off your shoes. Everyone. 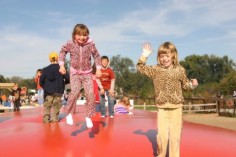 The simple things keep the young ones happy, like climbing on John Deere tractors, and the hay rack ride. These offerings, plus the gorgeous colors of fall, teaming with happy children’s faces, create picture perfect moments for camera enthusiasts. Time to take a selfie!

If you’re looking for a discounted pumpkin purchase – to be candid, you may consider buying elsewhere – pumpkins are pricey here. Still, as a novelty, it’s a gob of fun to take a hay rack ride (nominal cost) stop and shop for a pumpkin in the field.  A word to parents. Take the hay rack ride at the end of your visit. Otherwise, you’ll end up lugging the heavy fruit around. That’s a schlep.

For action enthusiasts, check out the pumpkin cannon and giant sling shots. These activities cost a nominal fee. Looking for a party place? Plan ahead, Vala’s is a great place to host a campfire site get together: Birthday, corporate event, field trip and a wedding. That said, take note. No alcohol is allowed.

Moms and dads. FYI. Don’t expect a Disney World Adventure at Vala’s Pumpkin Patch with lights, camera and action. Vala’s Pumpkin Patch is low-key country, complete with down home fun. Sure, there’s roughly 2 hours of stuff to see and do. What’s especially a delight is that each fall season Vala’s adds a new attraction.

Be aware. Some of the sights might bore adults such as the non-spooky haunted house and storybook lane – yawn. There’s farm animals (plug my nose) to feed and pet. Still, without a doubt, young children seem to enjoy it all.

But hay….Everyone likes the train. The pig race kills time. If all else fails, you can munch on food like turkey legs, fried Succotash, or Barbecue. A word concerning the pocketbook. Expect to blow some cash, especially if you shop for Halloween supplies, costumes and other goods – gourds, jellies, cider and such. Kudos to Vala’s though. A lot of the food items and scented candles are made in Nebraska – nice.

As for admission at Vala’s Pumpkin Patch, it ain’t cheap (ain’t used for emphasis), but not too costly either. In a nut shell, Vala’s Pumkin Patch in Gretna Ne is a must-see attraction for families every Fall season!