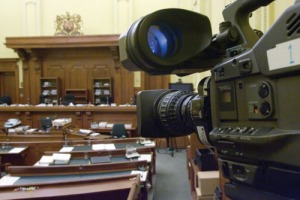 By Susan L. Stern Omaha NE — Lights, camera, action! The gavel to gavel live TV/Internet coverage of the Casey Anthony murder trial and the circus surrounding it exemplifies the need to ban live courtroom cameras. While elements of the case warranted extensive print/media news coverage on its own, live coverage triggered an international media frenzy with news content TV shows like CNN’s Nancy Grace & the like publicly convicting Anthony – potentially jeopardizing the Defendant’s right to a fair trial, while degrading the justice system and the principle of innocent until proven guilty.

As a former journalist, I strongly favor an open justice system for citizen access. Yes, the public has a fundamental right to view a trial, have access and attend trials held in a public place, a right backed by the First Amendment to the U.S. Constitution. Advocates claim courtroom cameras function as a checks and balances system, ensuring professionalism by attorneys and the judge. The same principle of keeping a critical eye on attorneys and the Court remains available to the public and reporters, by simply physically attending the proceedings and reporting on them. Live TV cameras are not necessary.

Additionally, the televised Anthony trail, clearly took away the judicial system’s dignity and decorum, evidenced in part by a courtroom gallery observer giving the bird to a Prosecutor, a mentally unstable observer shouting crazy talk, and fist fights from citizens fighting to get a courtroom seat. Fortunately, the jury only witnessed some of the inappropriate goings-on, was sequestered and was able to not be swayed by the media circus and their pundits’ across-the-board public conviction of Casey Anthony.

On a side note, I do believe the Anthony verdict was rendered fairly based on circumstantial “evidence,” the lack of “scientific evidence” and reasonable doubt that the Defense attorneys were able to show. The prosecution’s use of unaccepted “evidence,” such as the unproven validity of vehicle air samples showing human decomposition is one factor for their case’s demise – as was the state’s inability to determine Caylee’s cause of death –  not enough to convict. The only thing the prosecution did effectively prove is that Casey Anthony was a pathological liar.

Still, outside the courthouse, there’s another bad after effect of the televised trial and media circus reaction to the verdict. Combined, it has triggered a potentially dangerous situation for all parties. It’s being reported that after Casey Anthony’s murder acquittal, their family, the jurors, attorneys and perhaps the judge are suffering a backlash in the form of death threats. The grandparents, George, Cindy and Lee have reportedly gone in hiding. When the dust settles, will they be able to return to work and lead normal lives? Despite her acquittal, Casey, soon to be free, may never escape being recognized, likely preventing her too from finding gainful employment, and moving on with her life in a healthy way – safe from mentally unstable vigilantes who vehemently oppose the verdict thanks in part to the media ‘s sensational and biased opinions – triggered by live trial coverage.

Additionally, on Orlando Florida streets, there is a boiling pot of public emotions in the form of protests from citizens who don’t feel justice was served – ignited by a biased media and extensive live Trial coverage. Would some crazy person take it upon him or herself to murder Casey or her family? Certaintly, media bias triggered by Live TV cameras, are primarily to blame for the troubles all parties involved now face.

There is also the issue of catapulting attorneys and the Judge to celebrity status, a self-interested motive to increase their political and financial gain – an after effect of live courtroom cameras and combined media circus. Did each party play to the camera and forget their duty?

So many questions. But one answer is clear. Cameras in the courtroom, especially in sensational trials like this one, have a potential to create public chaos, ignite a life-threatening backlash to all parties, and could fail to give a defendant a fair trial. Live TV courtroom cameras must go for the good of all citizens.